GEDIMINAS GELGOTAS ON LATEST WORKS AND COLLABORATIONS for PLANET HUGILL

Gediminas Gelgotas was interviewed by Robert Hugill for his online Planet Hugill publication upon Gediminas’ visit to the UK to record at the legendary Real World Studios with his ensemble New Ideas Chamber Orchestra NICO.

Please find an excerpt from the article bellow as well as a link to the full publication here.

Classical with a popular feel: I chat to Lithuanian composer & performer Gediminas Gelgotas

He is also influenced by the music that surrounds us

When I ask about the style of his own music, Gediminas is firm that it is minimalist. But admits that there are different styles of minimalism and that his own pieces do not strictly sound like American minimalism or the Baltic minimalism associated with Arvo Pärt. But Gediminas is excited by the possibilities provided by the sheer number of shapes and layers that can be developed out of the same material, and he likes to work in this focused way.He is also influenced by the music that surrounds us in taxis, in the street, and from popular culture. He also appreciates the ability of popular music and rock music to communicate with big audiences, and some of NICO’s performing style is influenced by this. But he and the other musicians are all classically trained in music academies. Though he does not do it deliberately, he admits that his own music is impacted by these more popular influences, and he describes it as classical music with a popular feel.
Whilst he feels that anyone who likes the music of Arvo Pärt or Philip Glass would like his music, that he allows the influences of popular music into himself, into his music, partly explains why NICO’s work is so popular with younger audiences. And these influences extend to club and dance music, so that Gediminas will use the sort of strong beats that are found in dance music by, for example, using the double bass to provide a strong beat in the bass line. He also uses some electronics, as in his Symphony No. 1. 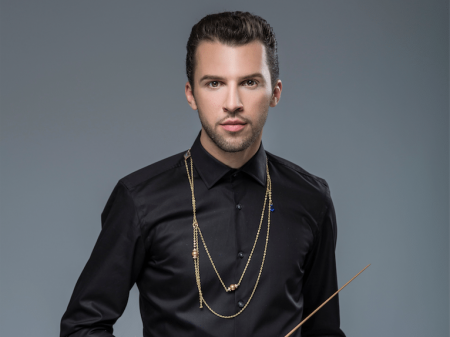